Taking Charge of the Doctor Visit 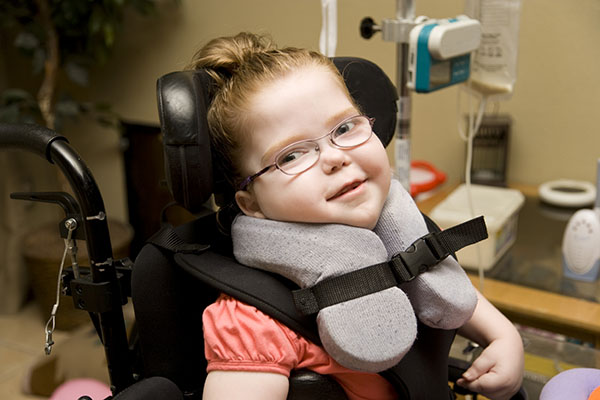 The families of children with neurodevelopmental disabilities tend to spend more time at a doctor’s office than those of typical children. But while health care offices play a bigger role in their lives, it can be hard for young people to have a voice there.

“I think so many people are just unaware at all that children at earlier stages and younger ages even can have a say in what's going on,” said Sara Graceffo, a genetic counselor in Salt Lake City. Last year she was on a team that created a resource to help children with disabilities learn to take responsibility for their own health care. The project was part of the Utah Regional Leadership Education in Neurodevelopmental Disabilities program.

Families seeing the guide may realize that their children can take a more active part in a health care visit--even those who use a communication device, Graceffo said. They can program the device with the right responses.

The guide, Skills and Strategies for Health Care Decision-Making with Children, is now available to families everywhere through the Rural Institute for Inclusive Communities at the University of Montana.

Montana is one of five rural states covered by URLEND, a collaborative training program. The Institute for Disability Research, Policy & Practice at Utah State University is one of several entities that collaborate in URLEND. The program provides leadership experiences to trainees in a variety of health care disciplines. Graceffo joined the program as a graduate student and has now gone on to take a job in her field. Last month, she and several other participants took the time to be interviewed about the guide, now that it is available to the public.

They saw the need when they realized that most self-advocacy materials are aimed at teens. “When you work with pediatric providers, they kind of know you through most of your life's span up until that point,” said Rebecca Foster, another former URLEND participant who is an occupational therapist from the Minot Infant Development Program in North Dakota. “And so if you don't start preparing them to advocate for themselves, to really take a role in decision making and speaking out for what they want in their health care, it's an even more daunting experience to prepare for that transition once [they’re] late teens and young adults.”

For many parents it’s a scary thought: suddenly at age 18 their child is expected to go to a new, adult-focused provider and in many cases, to navigate their visits on their own. The resource gives families a step-by-step guide to prepare, both in the short-term and the long-term.

For some families, that preparation could be extensive. “My daughter uses a Big Mack [a communication device that plays recorded messages],” said Jennifer Banna, a former URLEND trainee and the current Montana Family to Family Health Information Center Coordinator at the University of Montana. “We have to program that ahead of time. So if I wanted to program it so she could check in at the doctor, I would have to put all the stuff in it. So that's one of the great things about [the guide], is that it has that opportunity to prepare, because it's hard to just do that when you when you get there.”

“These are all skills that they can use within the education setting,” said Foster. “If you work on developing that team approach, you can have your speech language pathologists working with the child on developing how to use their communication device or communication skills… In the past, [with] some of the children I've worked with on the autism spectrum, the speech language pathologists would create a social story for them to go to the dentist, or to go to a specialist appointment. These are things that some teams are already doing.”

The guide is based less on what a child should do at a certain age, and instead breaks it down into four stages that use developmental cues to help the parent know how much involvement to expect from the child. A “choice-maker” is ready to role-play a doctor visit, perhaps by using a stethoscope on a toy bear. She can tell the doctor whether an examination should start at her head or her toes. Question-answerers can ask prepared questions at the right time during the visit. Decision-participants are ready to tell the doctor if they have any questions when the visit is winding down. Decision-makers are ready to have the doctor explain a medical procedure directly to them, and to ask for handouts and notes discussed during the appointment.

The URLEND team developed their resource after gathering information from contacts, families, medical providers and self-advocates. It was handed out to members of the Montana chapter of the American Academy of Pediatrics.

“I think it would take a huge burden off of parents and families, especially in that transition phase, knowing that their children have been working on this their whole lives since as early as they possibly could,” Graceffo said. “I think parents will feel a lot better sending their child to an appointment when they turn 18, knowing that they have that autonomy.”