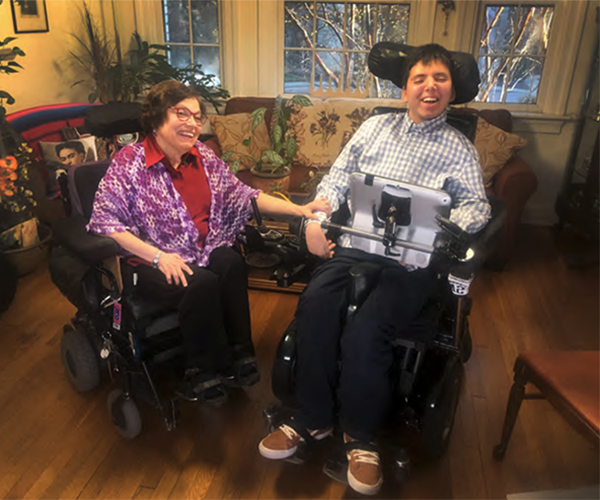 Samuel with Judy Heumann, one of several disability advocates he interviewed in the  film.
Photo credit: Like Right Now Films.

“Nobody tells you how to be an adult, let alone an adult with a disability.”

Samuel Habib, a 21-year-old college student from Concord. New Hampshire, is on a mission to live as full a life as possible. He likes hanging out with his friends and going on adventures and says he’s a speed freak. He loves his family and loves to travel. He wants to date, get married, and maybe have kids. But he drives a 350-pound wheelchair, uses a communication device, and can have a seizure at any moment. Determined to find his path forward, though, he seeks out guidance from America’s most rebellious disability activists. On May 17th, a documentary short about Samuel’s experiences premiered as a New York Times Op-Docs. A feature-length film is planned for late 2023. The entire lead cast on this project, and most of the production and outreach crew, are people with disabilities.

The runtime of My Disability Roadmap is 22 minutes. My biggest critique of the film is that I would have liked it to be more detailed. For a short film, it did a good job of introducing us to Samuel and letting us get to know him. Samuel stars in the documentary, narrates it, and directed it. Between interviewing seven disability rights activists, he tells us about his life and how his cerebral palsy affects him. I am impressed by how matter-of-factly he speaks about his disability, while not being focused on his disability.

The documentary is positive while not backing away from what is frustrating to Samuel. In one scene, Samuel has an exchange with a woman at an airport who calls him a cutie and speaks to him as if he is a child. His father, Dan, explains that Samuel is a 20-year-old college student doing documentary film work, but the woman proceeds to ask him how old he is as if she hadn’t heard Dan’s explanation. After the woman leaves, Samuel’s face is locked in a grimace, his body tight, and he tells his dad how upset he is. How appropriate that on that day, Samuel was wearing a T-shirt that said, “Without communication there is no freedom.” There was also an incident where Vice President Joe Biden stroked Samuel’s face at a rally. Samuel narrates, “I can’t believe he stroked my face. Weird.” These incidents provide contrast to how the disability rights activists interact with Samuel. They treat him as an intelligent human being on a level playing field.

I appreciated seeing Samuel interview older disability activists as well as younger ones. It gave a sense of how far society has come. Judy Heumann was born in 1947 and “there were no laws in place,” no disability lawyers or advocates. Samuel also interviewed Bob Williams, who helped gain the passage of the Americans with Disabilities Act and is now in his mid-60s. When Bob grew up, his parents were told to institutionalize him and never look back, because he had cerebral palsy, drooled, and had little to no understandable speech. Fortunately, Bob’s parents “raised me in the same rough and tumble world of love as my brothers and sisters.”

Watching the documentary reinforces the fact that you can’t tell someone’s mental capabilities by looking at them. Samuel uses a communication device and his voice is computer-generated, but his thoughts are sophisticated and perceptive. It is important not to make assumptions about people based on appearances. You never know what’s happening on the inside. I would also say you shouldn’t necessarily make assumptions based on someone’s medical diagnoses. Samuel is a speed freak who loves to travel. I love quiet days at home reading and thinking through ideas. We both have a diagnosis of cerebral palsy, and yet we have different personalities and different abilities. Approach people with disabilities as you would anyone else – with kindness and respect.

My Disability Roadmap shows how valuable it is that people with disabilities get to tell their own stories. Comedian and actor Maysoon Zayid explains that “when you have more disabled people behind the camera, writing, shooting, editing, directing, creating docs like you are, telling our own stories, then it won't be the endless pity party.” Lydia X.Z. Brown adds, “We can't wait for, or rely upon, non-disabled people to save us.” Samuel’s documentary is a wonderful addition to this effort.

To end the documentary, Samuel says, “Meeting all of these mentors has been empowering. I am part of a strong disability community. We want change and we are going to fight for respect and rights at every opportunity. People paved the way for me. I want to pave the way for others.” And then, like a typical college student, his last line is, “Now, I just need to find a girlfriend.” I highly recommended watching this short documentary. We can all learn a lot from Samuel and from the people he interviews. There are pearls of wisdom, such as, “I ignore anyone who refuses to accept me. It's not easy. Instead, I always believe in me.”

You can watch My Disability Roadmap online for free. The video has audio description and subtitles, making it accessible for all.