Guest Post: The Americans with Disabilities Act and Me 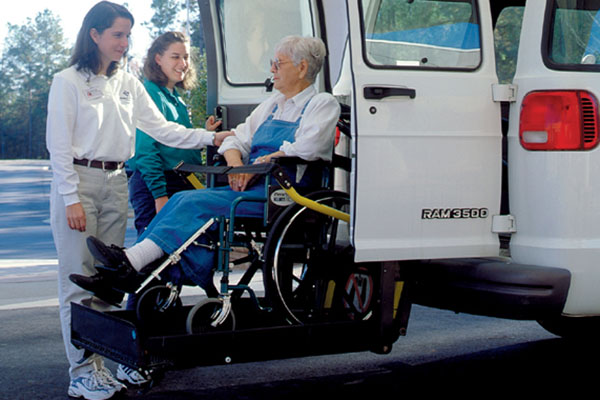 When I was a high school sophomore, our varsity volleyball team was very good. They finished the season as runners-up at the state championship. As their biggest and loudest fan, I was invited to sit with the team for the entire season. I felt like one of the girls, and it was awesome. The state tournament was in a large sports arena. The arena website claimed that there was wheelchair-accessible seating on all levels, but in reality, wheelchair seating was only in the top section. With my visual impairment, it was hard to enjoy the action from that distance.

The sports arena complied with Americans with Disabilities Act regulations by having wheelchair seating all around the top level. However, the ADA also stipulates that wheelchair users should not be isolated from other spectators, and I was isolated. If I had known I could only sit on the top level, I could have made different arrangements. The situation ended happily though; read to the end of the post!

The Americans with Disabilities Act was signed into law 32 years ago this month. Disability is more prevalent than you may realize. According to the Centers for Disease Control and Prevention’s Disability and Health Data System, 26% of adults in the U.S. have some type of disability; that’s one in four people. Among people aged 65 and older, two in five have a disability. The ADA prohibits discrimination against individuals with disabilities in all areas of public life, including jobs, schools, transportation, and all public and private places that are open to the public. The ADA thus provides legal incentive to add things like larger parking spaces, curb cutouts, and ramps into buildings, not to mention elevators and wheelchair-accessible seating.

The ADA helps those born with disabilities, those who acquire them later in life, and those without disabilities. For example, an automatic door helps people with strollers, supply deliveries, and people with temporary injuries.

The ADA is wonderful and necessary, but it can’t fully solve the barriers people with disabilities face. For example, one time I wanted to shop at a little boutique within a converted railway station. There was a curb cutout onto the sidewalk, and a ramp to the front door, but someone had put large plants on each side of the door, blocking my ability to get to the door and inside. My mom wrote a letter to the company managing the building explaining the issue. The next time we drove by, the plants were gone. If people know someone with disabilities (or have a disability themselves), they’re more likely to design and decorate with disability concerns in mind.

I would love to see larger doorways and hallways everywhere. It would be good for walker and wheelchair users, strollers, and those assisting others, not to mention social distancing when desired. The spirit of the ADA is to include people with disabilities in all aspects of life, and treat them as valuable members of the community. An attitude of genuine inclusion will always be needed and appreciated.

The Americans with Disabilities Act of 1990 has greatly impacted me, and so has other disability rights legislation. These laws allowed me to enter the public school system and learn along with my peers. My elementary school installed an elevator to get me to the music room, and the art teacher came to the regular classroom since the art room wasn’t accessible. In middle school, an automatic door was installed so I could enter the building independently. In high school, I was issued an elevator key to get to my upstairs classes. I attended a public university and graduated Magna cum Laude, and I am currently employed part-time. The ADA laid the groundwork for me to cheer for a volleyball team to my heart’s content, and for the team to show kindness to me in return.

Although I watched the state semifinals in the nosebleed section on Friday night, the coach made arrangements for me to sit with the team during the state finals on Saturday afternoon. When the girls lifted the runner-up trophy together, I was right there with them.