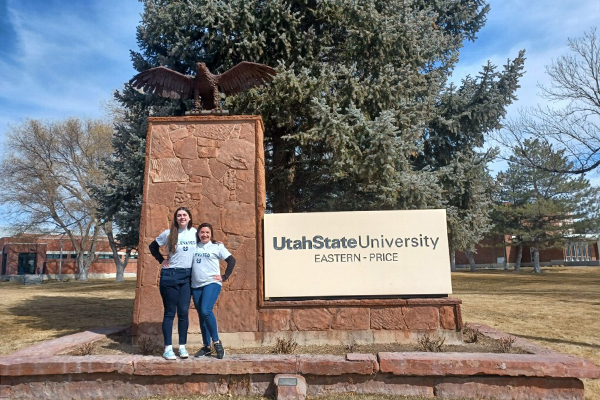 This August, Aggies Elevated will welcome its ninth cohort to the Logan campus, and its first cohort at the USU-Eastern campus in Price. There will be 21 students in Logan—the largest group ever—and five in Price.

It’s the next step on a path that has left its mark on Utah’s higher education and trended upward for eight years, with more changes on the horizon.

When Aggies Elevated launched at Utah State University in 2014 with donor funds and eight students, it was an experiment in full inclusion, providing the opportunity for a “college experience” for students ages 18-26 with intellectual and/or developmental disabilities.

A year later, the program received a federal TPSID (Transition & Postsecondary Programs for Students with Intellectual Disabilities, or “tip-sid”) model demonstration grant to expand the program.

The experiment has been successful: As of June 2022, 24 of 29 graduates (83 percent) are engaged in competitive, paid employment.

It’s also fair to say that the “college experience” has evolved into a full-blown college education for many students who were told they would never go to college. About 33 percent of graduates have continued, or are continuing, their education for associate’s or bachelor’s degrees. There were no AE graduates in 2022, because four of the six students in that cohort are pursuing an associate’s degree. The other two decided to come back for a third year because the experience has been so valuable.

In 2020, Utah Valley University took the lead in writing the grant application for the next round of TPSID funding. The resulting award created Wolverines Elevated at UVU, which launched in 2021; the expansion of Aggies Elevated to the USU-Eastern campus in Price in 2022; and the Utah Higher Education Inclusion Alliance, to promote the development of inclusive programs at other universities throughout the state of Utah.

While Aggies Elevated is located administratively in USU’s Special Education and Rehabilitation Counseling department, the program has longstanding ties to IDRPP. The 2013 fundraising event that culminated in the launch of the program in 2014 was spearheaded by former IDRPP (then called the Center for Persons with Disabilities) development director Shane Johnson and Dr. Jeff Sheen, who was a CPD training and developmental specialist at the time. Sheen was also the co-principal investigator on the 2015 TPSID grant.

Former CPD PR specialist Sue Reeves created posters and promotional materials for the event, and she became the Career Success Coordinator when the 2015 grant was awarded. She became the program director in early 2019. In addition, IDRPP provides partial funding for the Aggies Elevated internship coordinator, as well as office space for the AE team.

Reeves will retire at the end of this summer. Dr. Robert Morgan from the Special Education and Rehabilitation Counseling department, who was the principal investigator of the original TPSID grant, is also retiring. They are the last two members of the founding AE team.

Dr. Michelle McKnight-Lizotte, assistant professor in the Department of Special Education & Rehabilitation Counseling, has been named the Aggies Elevated Executive Director and will oversee operations at both sites.