The Invisible Crime Of Disability Hate 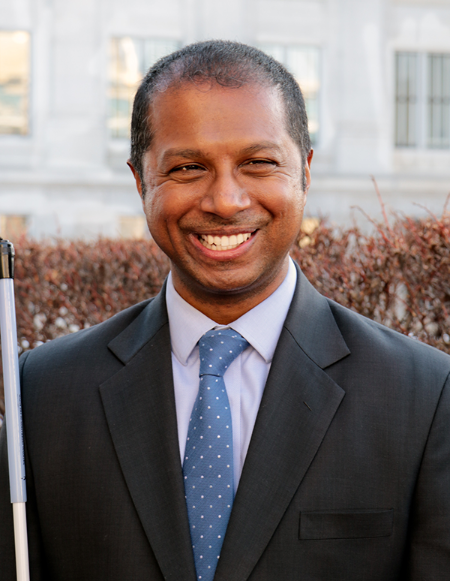 One time during his undergrad days, Sachin Pavithran, who is blind and a person of color, was sitting at a Logan bar with some friends, who were white women. Suddenly, he felt himself being pulled from the booth he was sitting at, unable to even see who the person was. Before he could react, he was slung violently over the bar. His friend saw the perpetrator raise a beer bottle in the air, and stopped the man just before he was going to smash Pavithran’s head in with the bottle. Pavithran said the man was angry he was socializing with white women. He also knew his disability couldn’t be separated from his experience, particularly since he couldn’t see to defend himself or give a description of the man to police.

The manager of the bar kicked the guy out, but he was not arrested. Afterwards, the manager asked Sachin what he had done to provoke the act of violence – in essence, blaming the victim.

“I’m not ashamed to talk about it,” said Pavithran, who is the policy director at the CPD and serves on the U.S. Access Board. “Violence against people with disabilities is too often dismissed as people just being immature. Hate crimes that get attention are against more historically known groups, and hate crimes against people with disabilities are shoved under the carpet because it is seen as a crime of convenience, not hate.”

This is particularly true for the intersection of race and disability, as well as gender and disability (80 percent of women with intellectual disabilities have experienced sexual violence – they are more likely to be sexually assaulted). The most recent report from the National Crime Victimization Survey, conducted by the U.S. Bureau of Justice, indicated that people with disabilities are at least 2.5 times more likely to experience violence than those without. The Southern Poverty Law Center said, “Much of that violence is extraordinarily cruel and sadistic.”

It is in part because of the vicious cycle of victimization and not being believed that disability hate crimes in the U.S. are severely under-reported, under-investigated and under-prosecuted, according to an ACLU article.

Pavithran said victim blaming of people with disabilities is because favor falls on whoever is part of the majority, and if a person committing the crime is part of that group, they get automatic credibility. People will say, “They didn’t mean it that way,” or “You just heard them wrong.”

“The battle 30 years ago was getting people with disabilities visible and into the community,” Pavithran said. “When that happened, the battle became how to protect people with disabilities who are now publicly visible, that are going to be taken advantage of. Hate crime doesn’t always have to be a violent act to be devastating to someone – if it is not perceived as extreme, it is not taken seriously.”

This couldn’t be made any more obvious than by the fact that the FBI statistics claim one percent of hate crimes indicates a disability bias (these reports are not anonymous). Contrast that to the Bureau of Justice victim survey showing people with disabilities are 2.5 times more likely to experience violence than non-disabled people (these reports are anonymous). Even with no anonymous reporting, in 2017, the FBI said that hate crimes based on disability increased 65 percent from 2016. (Reports of hate crimes increased overall.)

This means hate and discrimination against people with disabilities are almost never prosecuted.

“If I struggle with my background, imagine how difficult it is for someone without my benefits of education and career influence,” Pavithran said. “The only reason I’d be taken seriously is because of my position. Add in intersectionality of disability and race, and it can keep someone in the cycle of being a victim.”

Pavithran has also experienced violence and hate at Utah State University. After 9/11, he was walking over a crosswalk along Aggie Blvd., and a man walked up to him and said in Pavithran’s face, “Go back to your f***ing country you desert n****r.” Pavithran was shocked, and didn’t know what to do. He ended up telling a few people on campus, and their reaction was, “Oh, he was just being an idiot.”

Pavithran said if he was sighted he could have gave a description of the perpetrator, but his disability put him at a disadvantage.

Another time during his undergrad days, Pavithran was at his student dorm, Richards Hall. As he approached the stairs to leave for class, he tripped over a wire that had been tied across the top of the stairs and tumbled violently down the whole flight of stairs.

“I had been tripped purposefully tripped, and as I was tumbling, I heard two or three college guys cracking up. They had been waiting for it to happen,” Pavithran said.

Because he couldn’t see who it was, there were again no consequences for the perpetrators.

“It was not something I expected to hear on campus,” he said, “I thought people walking around a university would be more tolerant. People can say being name called isn’t brutal, but it does push fear into you. I think most people would be surprised things like this happen here on campus.”

Between being a person of color and being blind, Pavithran said he experiences high anxiety when traveling by himself. “It hasn’t stopped me – I can’t let it control my life, but that doesn’t mean I’m over it,” he said.

What is the solution to preventing these ‘invisible crimes’? Making them visible, for one. Secondly, it can be specified in legal terms with consequences, like in the Utah Hate Crimes bill.

“We have to bring up these issues as they happen, including here on campus,” Pavithran said. “It happens to a lot of people, but it is not talked about by society or the media. They think disability hate isn’t a crime – they don’t look at hate and say that’s a criminal act. But with the bill, there are specifics of the hate crimes that can be prosecuted.”

If you or someone you know has experienced a hate crime, learn how to effectively file a report with local police from VictimConnect.org. If you distrust local authorities, report to the FBI office nearest you. If you have experienced discrimination or harassment at Utah State University, contact the Affirmative Action and Equal Opportunity office. If you live in Utah and have experienced discrimination based on disability in housing, education, voting, healthcare, or transportation, contact the Disability Law Center of Utah.