Delighted as I was by her rendition, I couldn’t help but question the metaphor. (I question everything, as you know.) Was the building site most important? There are only so many rocks, so someone’s going to have to live on the sand. How about the house itself? If both men built a coastal home and a tsunami arrived, it wouldn’t matter what the house was made of. The wise man isn’t a rock himself; he just built his house there.

Maybe Sand Guy couldn’t afford to build on a rock. He did the best he could with what he had. He wanted the ocean view and accepted the risks of his choice. That sounds pretty wise to me. Might the wise man assume his rock-site was unassailable, turn complacent, and let his house go to ruin? And I wondered which man was happier. I think it was Sand Guy. He certainly had an easier time getting in and out of his house.

A fatal flaw in this tale is its assumption that humans possess all or none of any given trait. I suspect we have all been foolish far more than we’ve been wise, but that’s because some wisdoms come with age. We can be wise in the ways of money, yet foolish in ways of the heart. Sand Guy will become much wiser after his first flood, but Wise Guy could stand to learn a thing or two, too.

When we believe we’ve already learned everything we need, we become complacent. We forget we’re the dwelling and not the rock. Looking down in judgment at our sand-dwelling neighbors, we don’t notice our own house is in disrepair. A home requires constant maintenance no matter where it’s built, or it falls down.

Notions of safety and stability probably prompted Wise Guy to choose that rock. Safety, though, will mean something different to each person, and will change as we age. If we also believe our happiness relies on safety, we are doomed to founder. Whether it’s protection from weather, criminals, economic collapse, or even our own predilections, “safety” doesn’t exist. Happiness, however, can be found wherever we are, for it is a choice: it exists independent of money or possessions, or even family and health.

Growing up, I was taught not to expect happiness; it was not a “now” thing, but a “then” thing. My father told me: “You don’t get to be happy until after you retire. Until then, you need to get a boring job with a pension like the rest of us.” At the time, I was heading to Ireland. My “permanent” job (one I loved) had been deleted, and my “permanent” marriage had fallen apart. I had no faith in rocks anymore. I was sure those foreign shores held my key to happiness.

I was shown the key, but I didn’t recognize it. I couldn’t fully grasp the concept that contentment came from within, but I pretended I did and went with the flow. The Irish perspective conflicts with the “pursuit of happiness” idea I’d grown up with: happiness, the ever-elusive creature, hides like a deer in a forest during hunting season. The Irish seemed to expect suffering, so everything that was better than that was a plus. Happiness eluded me because I believed external forces or solid objects created it.

Not a few people believe that their happiness depends on stability, order, and guidelines. Every day I hear new horror stories from very unhappy fixed-income seniors who are shocked to discover that the strict rules in subsidized housing are made (and broken regularly) by their property’s owners. Did you know that private owners of some types of subsidized housing are allowed to raise the rent, even if the renter has a lease agreement? They can change the rules, and tenants have no recourse. Affordable housing is in such short supply, and government agencies often side with the owners against tenants who bring complaints. I have experienced this personally.

I moved more than seventy times before discovering that utterly safe places—houses built on rocks that never deteriorate—are illusions. I just moved again in June to a low-income complex owned by a public housing authority. I was on the list for three years. Definitely, I’ve a safety net when it comes to rent hikes, and because they’re not in this for profit, I don’t have to plead to get repairs. There are fewer rules for me now than there were in privately owned residences, and we’re allowed to decorate. This is the first time outside Ireland I’ve had this freedom. I even have a garden. It’s in the “bad part of town,” and afflicted by floods and earthquakes, but it’s also an area of stunning beauty. That’s important to me. Sand Guy would approve.

Those who hate the shifting sands of today’s world are not happy campers. Attempting to bring order to the chaos, they become even more set in their ways, to their physical and mental health’s detriment. I thank my lucky stars that what I thought were rocks—whether job or health or home or relationships—crumbled early. Rocks look safe, but they also block the view. Once they were gone, nothing stood in the way of finding my happiness except my own unquestioned beliefs.

The mind can travel no matter what shape the physical body is in. It needs neither paycheck nor vehicle to transport itself. When I was house-bound after a stroke, my mind stayed agile and free. I was happy (and still am). I see people every day waste their able bodies and intact senses because they choose to remain in rigid mental and physical stances that bring no joy. I’m happy I’m not stuck in that kind of disablement anymore.

These days, I’m not afraid of shifting sands or stormy seas, whether actual or metaphorical. Indeed, I love them. They pulse with Life. Having thrown caution to the wind, am I living in a fool’s paradise? I certainly hope so. 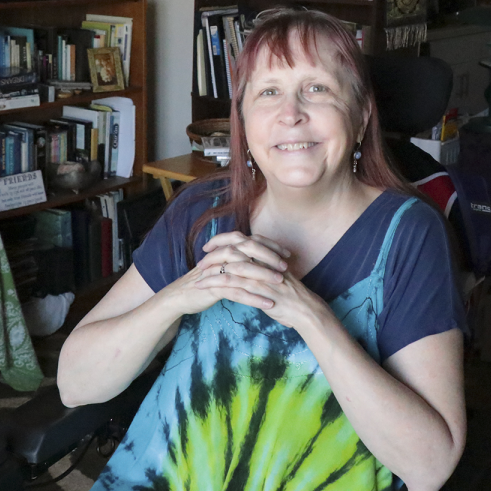